Are you on the fence? You don’t need to be.

How a rod meets your demands; and how it compares to others you have tried. These two aspects are paramount when we choose a new rod. Lots of factors can be involved with what constitutes your demands.

The opening gambit for many of us will be budget and for others it will be purely performance driven. Personally, I’ve been at both ends of this and everywhere in between. I know what I like and dislike, and sometimes I’ve had to compromise on some of those things in order to fit a budget. More recently though, I’ve been able to focus more on getting rods that perform the best, and living with them is revealing. You start to notice subtle differences over time.

I love being a year-round full time fly fishing guide. I get to meet some really interesting and great people daily and with them they quite often bring their own tackle to use. It’s not uncommon for me to have to demonstrate a particular method or technique when guiding, so It’s fair to say I get to try quite a range of tackle, if only briefly perhaps, but there aren’t many makes and models of rods and reels that don’t cross my palms throughout the year. Sometimes, very occasionally, you genuinely get a ‘wow’ moment when you try something. This happened to me a couple of years ago when I first got to try a regular client’s Tactical Pro 9’6” 3/4wt. Quite simply, the best all-round rod I have ever used. Superb with a fly line or french leader. I should have bought one at the time, but didn’t because I was tied in with a sponsorship deal with another manufacturer. Times do change though, and as I thought about once more becoming an independent, free to choose what tackle I need, irrespective of brand, my thoughts immediately turned to Marryat. 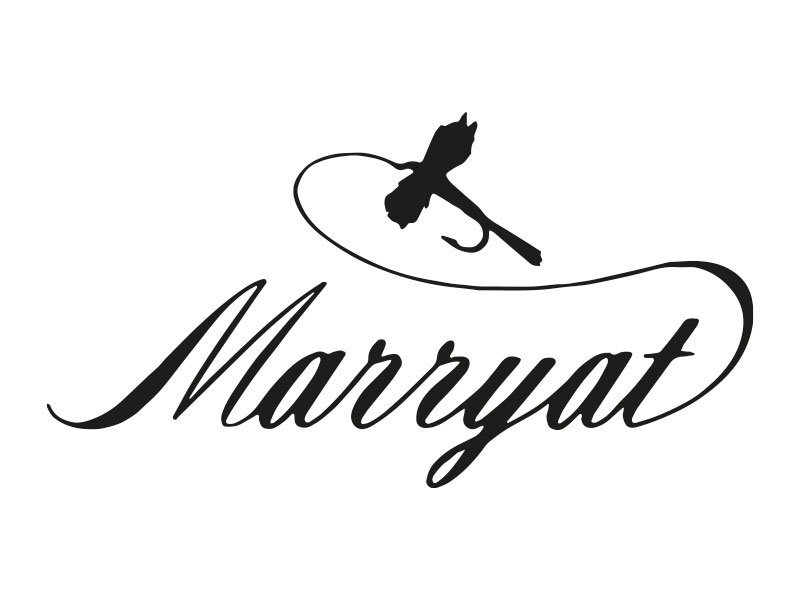 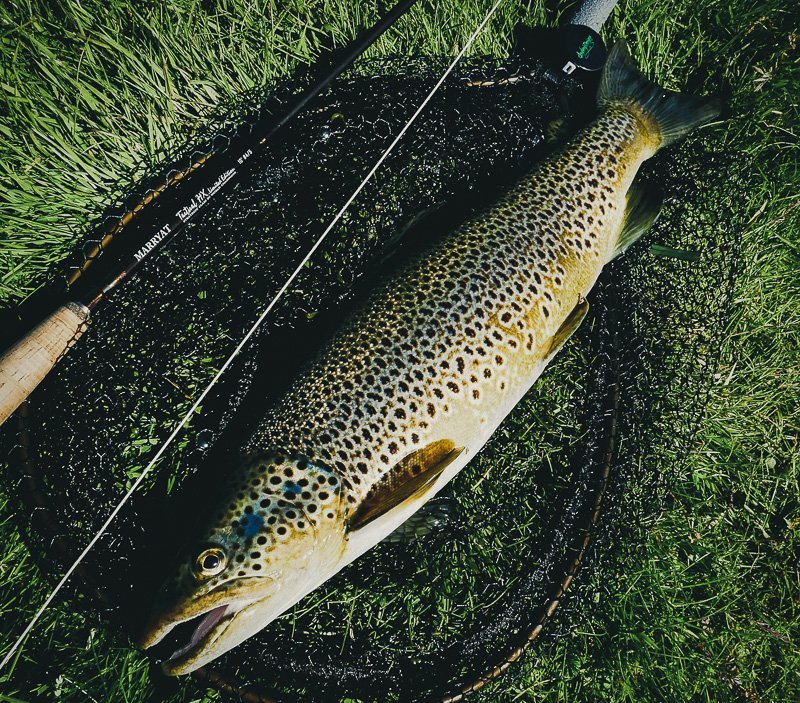 There’s so many brands out there, why choose Marryat? 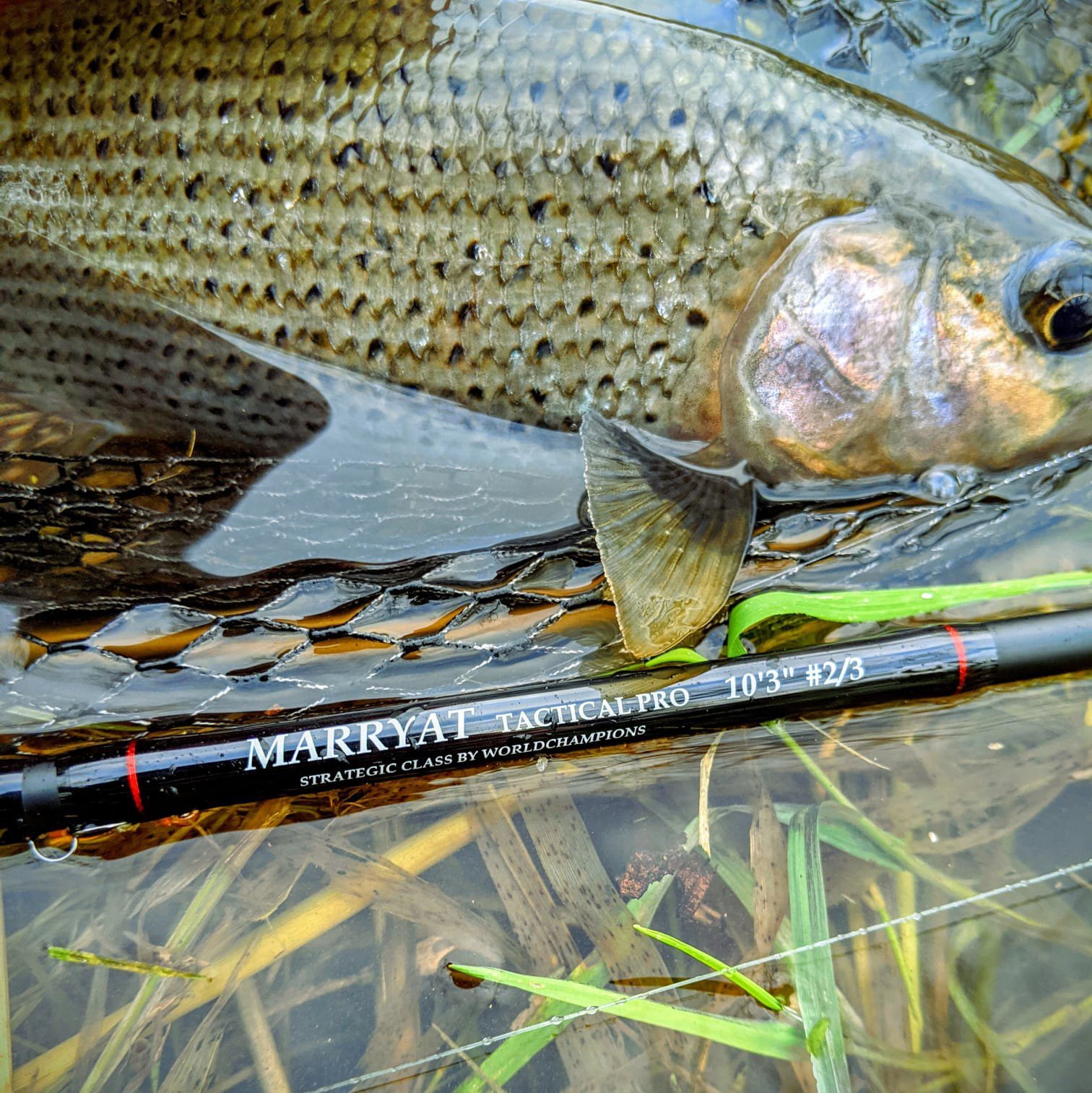 Firstly, these rods aren’t produced to hit marketing targets. They’re not designed by salesmen. They are developed by some of the best fishermen in the world to meet specific needs, and they are thoroughly tested for months or years before being released on sale.

I really wanted a top spec nymphing rod, and as I said above, I know what I like and dislike and I’ve definitely been more than niggled by the odd ‘premium’ nymphing rod before. There’s no benefit to a highly polished rod blank. Far from it. I constantly see fish spook to rod flash on the gin-clear chalkstreams. So a rod with matte paint-work is definitely preferable. Quite often we have to get close to our quarry and everything we can do to minimise spooking the fish must be taken advantage of. I like to fish nymphs with the index finger of my rod hand pointing up the cork handle and touching the blank to give me more feel. A full-wells grip would make this feel awkward. On long rods, a down locking reel seat is preferable to help balance the rod with a lighter reel. Lighter is better, especially when it comes to ‘feel’, and this can be largely down to the rods action too. It’s a pain having the first stripping guide on the second section of the rod, causing line sag and inevitably dragging the nymphs, so having that ring closer to the cork is a welcome addition.

As you can tell, from the off, cosmetically, the Tactical Pro 10’3” 2/3wt ticks all the boxes for me. All well and good, having a rod that looks great, but performance must rule here, too. And it does!

I thought I’d try to explain what this rod is like to actually fish with, and how using it has made me re-assess and compare other rods that are out there that I’ve either owned or used.

Immediately, it feels light. Really light. I set up with a pair of nymphs; 3.5mm tungsten bead on the point, 3mm bead on the dropper. I saw a promising looking run and cast my nymphs to it and they fell in line exactly where I was looking. First drift and and as the bi-colour indicator slipped away my index finger gave a jolt as the rod tip hooped into it’s first grayling. It was a moment of fluidity and instinct. Hard to put in to words how utterly electric that feeling was, but having got used to previously relying so heavily on what the indicator is doing it totally took me by surprise to feel the take to such an extent. The rod was hooped nicely; it felt like a smallish fish, maybe a pound or so; lively and trying it’s hardest to use it’s sail-like fin to it’s advantage in the fast water, but for every lunge it made I was countering by throwing it off balance by moving my rod tip and it was soon nearing the net. The moment, as we all know, using long rods, that hook can pull and we see our prize slide back to depths once more, almost landed but not quite. I needn’t have worried; I played the fish upstream of me and let it come downstream with the current in to the awaiting scoop net. That had to be one of the least concerning battles I’ve ever had with a grayling. I took a moment to assess what had happened in that briefest of introductions to the rod. Firstly, the accuracy. Was it just a fluke the nymphs landed exactly where I was looking? And then there was that feeling when the fish took. The total lack of drama in playing it.

Where there’s one, there’s always another, the saying goes with grayling. I made the same cast again, and it was exactly the same cast again, in the same place. Eyes fixed on the indicator, my hand felt something and I struck. No fish. The indicator hadn’t moved. I felt something again and struck instinctively, but no fish. I was feeling the nymphs hitting rocks on the river bed. Sure I’d had rods that you can feel that with before, but this was visceral. I was starting to tell the difference. I fastened my eyes to the seam of the run and the nymphs made their mission to it, I tracked them through, then wallop! The rod was hooped again as a struck and the balance-throwing game was afoot once more, with a better fish on this time. After the last battle I thought I’d see what this rod could do and tried to lift the fish as quickly as possible without breaking the tippet. It came up and I could see it, but as it neared the surface it bolted back down deep, the rod smoothly soaking it all up. Not once did I think I was going to lose this fish. The way this rod bends with a fish on is mind-blowing; utterly predictable, confidence-inspiring. It has the most delightful tip that is lively and sensitive, with a curve that quite simply progresses down the blank. A different premium rod, touted by many to be the best there is, actually has a sticking point, where it transitions from it’s soft tip to the ‘backbone’ section, which isn’t all that noticeable on harder hitting trout or bigger fish, but on little grayling in particular, especially when fishing fine tippets sub .10mm fish can be bounced or lost when they make these last minute dashes and the rod catches you out as it switches from soft rod to stiff. This just isn’t the case with the Marryat, which I should say doesn’t and how impressive it is, but it’s more than that. The real swan song is that you don’t think about this rod at all when you’re using it. Within a few minutes, everything is intuitive. There are no niggles distracting you. You can really feel the difference between coming into contact with a fish or the river bed. Your casts just go where you’re looking without thinking about them, and when you hook a fish, it’s almost unfair how much control you can exert.

I had a previous nymphing rod that was great with two or three nymphs on, but when it came to casting a single size 18 nymph, it struggled like mad. I did just this with the Marryat and again, it took it all in it’s stride. Unweighted single shrimp pattern to a team of three heavy flies, it just gets on with it as though nothings changed.

Given the rod’s dual rating I tried a few fly lines on this rod, with varying tapers in both 2 and 3 weights. They were all ok to cast, meaning that the rod isn’t ‘line-fussy’. My preference was for a 2 weight line (80gr for the first 30’ of line), and I liked both a short-headed weight forward line and a double taper with it. They would both have their place, depending upon conditions or tactics, so if I find myself out with only this rod and fish are rising, it certainly isn’t a case of making-do or getting-by using a fly line with this rod.

“I would urge everyone who is serious about their river fishing to consider one of these rods. If you can try one, do, but be prepared; your current rod might not feel the same afterwards.”

Pete Bucky is a full time fly fishing guide on the rivers and lakes of Hampshire, Wiltshire, Dorset, Berkshire and Surrey in England.